A couple of days ago a friend from Lebanon told me about Eid il-Burbara or Saint Barbara’s Day, a holiday celebrated on December 4th in Lebanon and some other Middle Eastern countries. Because there are traditional Lebanese dishes associated with the holiday, I knew I just had to try at least one of them and share it with you. I chose to make a traditional dish called Ameh (wheat berries). Slightly chewy, crunchy and sweet, ameh is eaten as a snack or dessert.

For a little context, Saint Barbara was an early Christian Saint and martyr. Legend has it that she disguised herself in different masks and costumes while fleeing persecution. The history is a little murky regarding who Barbara was trying to get away from and why. Some say she disguised herself to elude the Romans who were persecuting her. Others believe the masks and costumes were because she ran away from her father who had kept her locked up in a tower. Either reason, it’s understandable why one would want to flee, undetected. You can read more about her life here, but as she is considered a martyr, you know her story didn’t end too well…. However, Barbara remains to be a popular saint in modern times.

Similar to the Halloween celebration in North America, for Saint Barbara’s Day children wear costumes and tour their neighborhoods for trick-or-treating. They also sing a special song for Saint Barbara and the celebration is a lot of fun. One of the traditional foods offered to children on this day is called Ameh. It’s made from wheat berries infused with anise seeds; and served with a hint of orange blossom water; sugar or a drizzle of honey; and raisins, almonds, blanched or unbalanced pistachios, and walnuts.

Ameh is a favorite for many. As you can imagine, there are about as many variations to this dish as there are cooks who make it. Some versions include shredded coconut, pomegranate seeds, pine nuts, and/or an added hint of rosewater. The amount of anise seeds used to infuse flavor also varies. Some like their ameh potent, with lots of anise flavor, and some prefer less. I tried to strike a balance. All the ingredients listed below are in suggested amounts. Feel free to adjust based on your preferences. The berries takes a bit of time to cook, but after they’re cooked, putting it all together takes just a few minutes. I gave a small bowl to my son for his afternoon snack, he said, “Maman, this is a good snack.” From the mouth of a babe, and it’s healthy too! 🙂 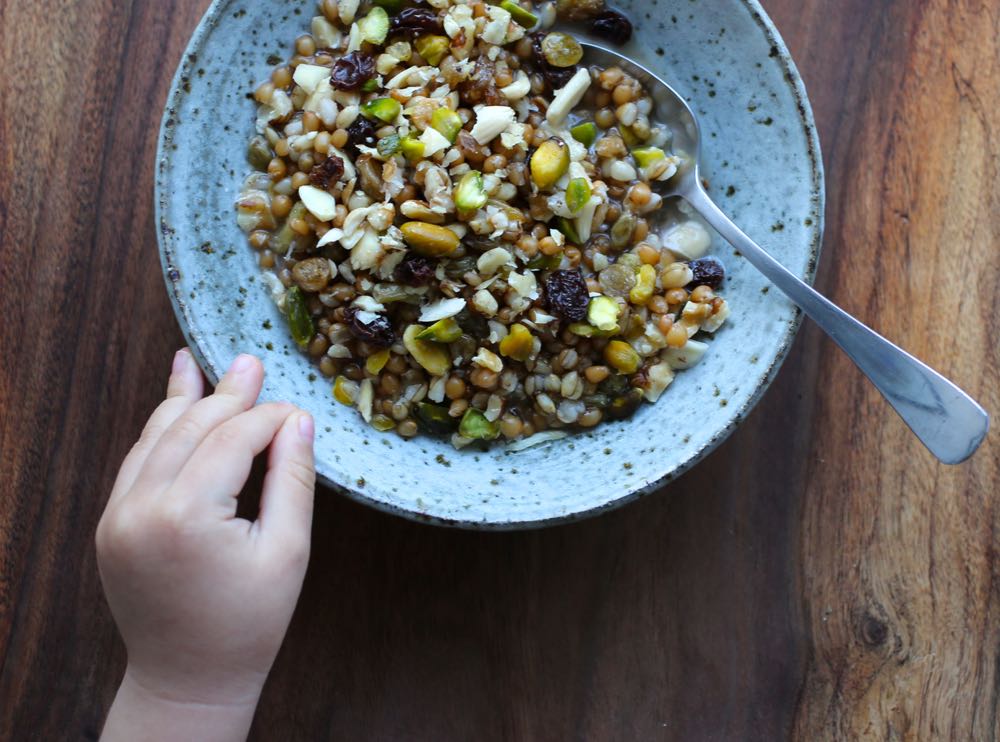 Wheat is significant to this holiday. Legend has it that Saint Barbara, while fleeing persecution, ran through freshly planted wheat fields that grew instantly to cover her path. To symbolically recreate the miracle today, wheat seeds (or chick peas, barley grains, beans, lentils, etc.) are planted in cotton wool on Saint Barbara’s feast day. When the seeds germinate and grow in time for Christmas, the shoots are used to decorate the nativity scene that is often placed below the Christmas tree.

Combine water, soaked wheat berries, and anise seeds placed in a tea infuser in a medium saucepan. Boring to a boil, reduce heat and simmer, covered, until wheat berries are tender, but still slightly chewy, about 40-50 minutes or more. If necessary, add more water to avoid it drying out. Also, you want to have some liquid still in the pan when the wheat berries are done.

When the wheat berries have cooked, place the berries in a bowl along with some of the cooking liquid. Add orange blossom water and sugar (or drizzle with honey). Top with nuts and raisins. Taste and adjust flavoring–adding more sweetener or blossom water—to preference.

Note: I blanched my pistachios but you don’t have to, I just wanted to have the vibrant green color in my dish. To blanch them, add them to a pot of boiling water for about a minute. Remove and immediately place them in an ice bath. Quickly remove them from the water and peel them with your fingers. Allow to dry.

2 thoughts on “Ameh for Eid il-Burbara”