Peas for pennies, greens for dollars, and cornbread for gold
— An old Southern saying

In the Southern United States, eating black-eyed peas, greens, and cornbread on New Year’s Day is said to bring prosperity—luck and wealth—in the new year. There are several legends as to the origin of this custom, but the tradition in the South dates back to the end of the Civil War when Union soldiers left behind Southern crops, black-eyed peas and greens, they considered food for animals. Staples in the households of many southerners at the time, these simple ingredients helped many families prevent starvation during difficult years. Stories have differed from home to home, but the celebration of these humble ingredients have not changed too much.

Each ingredient is said to hold significance and meaning. Black-eyed peas represent coins, greens represent dollar bills, and cornbread represents gold. The most common choices for greens are collard, turnip or mustard greens, but any greens will do.

As there’s no official way to prepare black-eyed peas and greens, I put a global spin on my version here with Indian flavors. For greens, I used rich, green kale as my “dollar bills” of choice.

As I wanted to make Liberation Soup on New Year’s Day, I saved black-eyed peas for later. After all, it’s never too late to make your own luck for the year, is it? Also, black-eyed peas and greens stew with cornbread is comforting any day in winter.

1 pan of moist cornbread (optional, for those wanting a vegan meal, skip this cornbread)

Cover peas with enough water to cover in a large pot. Bring to a boil, reduce the heat to medium-low, then simmer covered until tender, about an hour or more. Add salt about 45 minutes into simmering. Drain beans when done. Note: if time does not allow, you can use 1 can of black-eyed peas instead.

Meanwhile, heat coconut oil in a large soup pot. Add mustard seeds. When the seeds begin to pop, add onion and sauté until onions are translucent. Then add garlic, ginger and cook until fragrant. Add carrots, coriander, cumin, turmeric, chili pepper and salt. Stir until well combined. Add tomatoes, lentils, split peas, black-eyed peas and 6 cups broth. Bring to a boil and simmer until peas are tender, about 35 minutes. The texture should thicken up a bit. You can adjust the consistency to your liking by adding more broth or simmer longer for a thicker consistency. Taste and adjust salt. Add kale and cook just until bright green, 2-5 minutes. Remove from heat and add coconut milk. Adjust seasoning again. Serve with moist cornbread.

Optional: After stew is done, spoon into ramekins (or mini cocottes, as photographed above). Sprinkle with cornbread crumbs. Drizzle with oil and broil until the crumbs turn golden brown, about 5 minutes. Watch carefully. Garnish with a drizzle of olive oil, cilantro, flaky sea salt, and freshly ground pepper.

Notes: To serve, you can don’t have to use ramekins and broil. Simply ladle into bowls and serve stew as is when is done cooking. It will look like this. 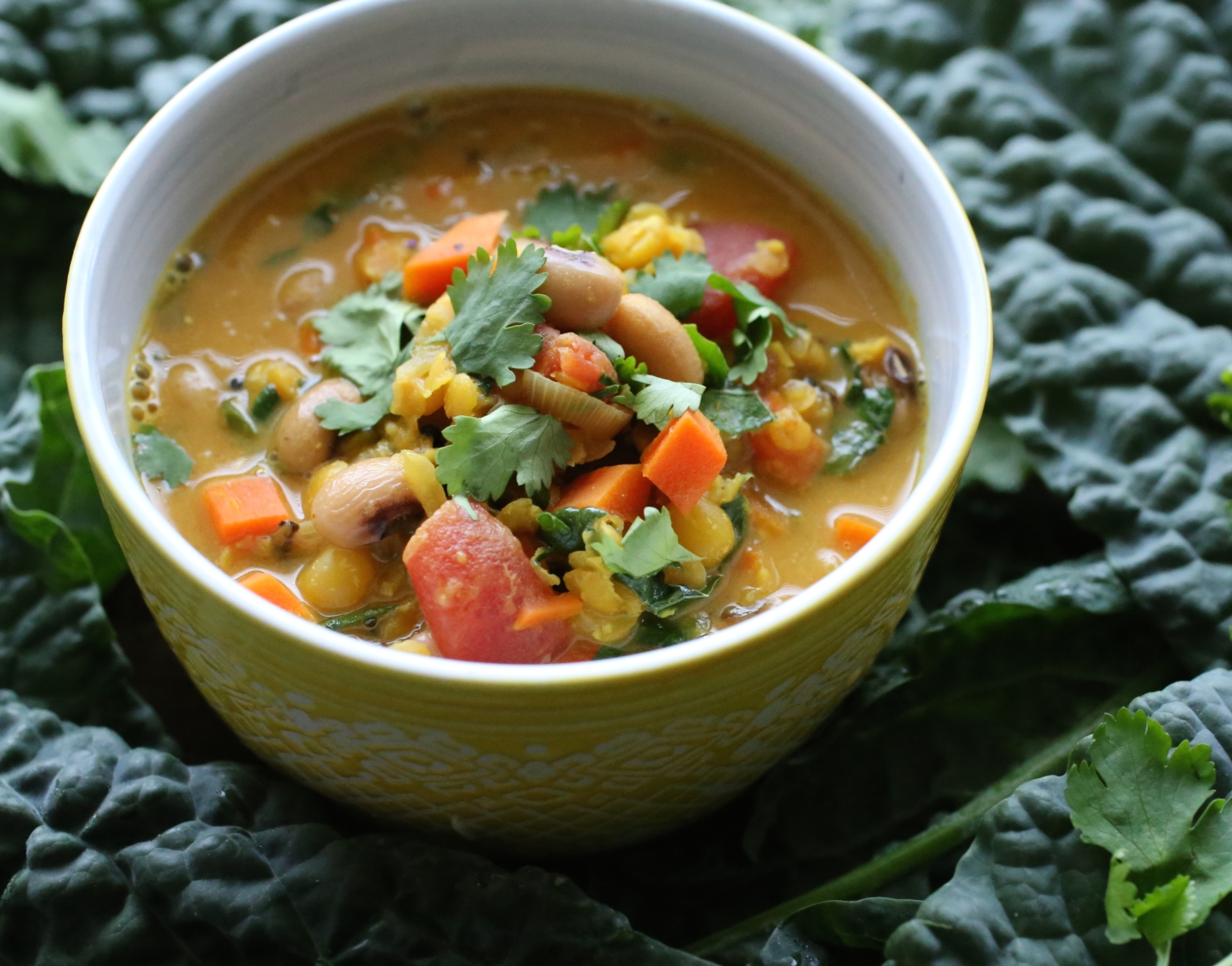 4 thoughts on “A Global Twist on a Southern Tradition: Black-Eyed Peas and Greens”